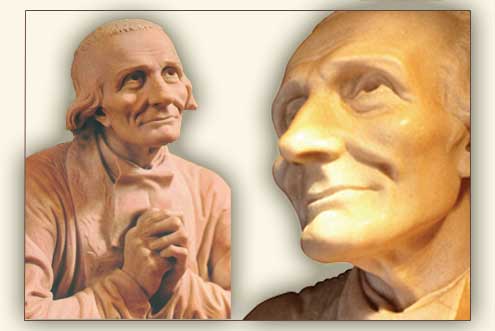 In 1806, the Cure at Écully, M. Balley, opened a school for ecclesiastical students, and Jean-Marie was sent to him. Though he was of average intelligence and his masters never seem to have doubted his vocation, his knowledge was extremely limited, being confined to a little arithmetic, history, and geography and he found learning, especially the study of Latin, excessively difficult. One of his fellow-students, Matthias Loras, afterwards first Bishop of Dubuque, assisted him with his Latin lessons.

Army Conscription in War With Spain

But now another obstacle presented itself. Young Vianney was drawn in the conscription, the war with Spain and the urgent need of recruits having caused Napoleon to withdraw the exemption enjoyed by the ecclesiastical students in the diocese of his uncle, Cardinal Fesch. Matthieu Vianney, father tried unsuccessfully to procure a substitute, so his son was obliged to go. His regiment soon received marching orders.

The morning of departure, Jean-Baptiste went to church to pray, and on his return to the barracks found that his comrades had already left. He was threatened with arrest, but the recruiting captain believed his story and sent him after the troops. At nightfall he met a young man who volunteered to guide him to his fellow-soldiers, but led him to Noes, where some deserters had gathered.

The mayor persuaded him to remain there, under an assumed name, as schoolmaster. After fourteen months, he was able to communicate with his family. His father was vexed to know that he was a deserter and ordered him to surrender but the matter was settled by his younger brother offering to serve in his stead and being accepted.

Jean-Baptiste now resumed his studies at Écully. In 1812, he was sent to the seminary at Verrieres; he was so deficient in Latin as to be obliged to follow the philosophy course in French. He failed to pass the examinations for entrance to the seminary proper, but on re-examination three months later succeeded.

On 13 August, 1815, he was ordained priest by Mgr. Simon, Bishop of Grenoble. His difficulties in making the preparatory studies seem to have been due to a lack of mental suppleness in dealing with theory as distinct from practice — a lack accounted for by the meagreness of his early schooling, the advanced age at which he began to study, the fact that he was not of more than average intelligence, and that he was far advanced in spiritual science and in the practice of virtue long before he came to study it in the abstract.

He was sent to Écully as assistant to M. Balley, who had first recognized and encouraged his vocation, who urged him to persevere when the obstacles in his way seemed insurmountable, who interceded with the examiners when he failed to pass for the higher seminary, and who was his model as well as his preceptor and patron.

In 1818, after the death of M. Balley, M. Vianney was made parish priest of Ars, a village not very far from Lyons. It was in the exercise of the functions of the parish priest in this remote French hamlet that as the "Curé d'Ars" he became known throughout France and the Christian world.

A few years after he went to Ars, he founded a sort of orphanage for destitute girls. It was called "The Providence" and was the model of similar institutions established later all over France. M. Vianney himself instructed the children of "The Providence" in the catechism, and these catechetical instructions came to be so popular that at last they were given every day in the church to large crowds.

"The Providence" was the favourite work of the "curé d'Ars", but, although it was successful, it was closed in 1847, because the holy cure’ thought that he was not justified in maintaining it in the face of the opposition of many good people. Its closing was a very heavy trial to him.

But the chief labour of the Cure d’Ars was the direction of souls. He had not been long at Ars when people began coming to him from other parishes, then from distant places, then from all parts of France, and finally from other countries. As early as 1835, his bishop forbade him to attend the annual retreats of the diocesan clergy because of "the souls awaiting him yonder".

During the last ten years of his life, he spent from sixteen to eighteen hours a day in the confessional. His advice was sought by bishops, priests, religious, young men and women in doubt as to their vocation, sinners, persons in all sorts of difficulties and the sick. In 1855, the number of pilgrims had reached twenty thousand a year. The most distinguished persons visited Ars for the purpose of seeing the holy cure and hearing his daily instruction.The Venerable Father Colin was ordained deacon at the same time, and was his life-long friend, while Mother Marie de la Providence founded the Helpers of the Holy Souls on his advice and with his constant encouragement.

His direction was characterized by common sense, remarkable insight, and supernatural knowledge. He would sometimes divine sins withheld in an imperfect confession. His instructions were simple in language, full of imagery drawn from daily life and country scenes, but breathing faith and that love of God which was his life principle and which he infused into his audience as much by his manner and appearance as by his words, for, at the last, his voice was almost inaudible.

The miracles recorded by his biographers are of three classes:

The greatest miracle of all was his life. He practised mortification from his early youth. And for forty years his food and sleep were insufficient, humanly speaking, to sustain life. And yet he laboured incessantly, with unfailing humility, gentleness, patience, and cheerfulness, until he was more than seventy-three years old.

On 3 October, 1874 Jean-Baptiste-Marie Vianney was proclaimed Venerable by Pius IX and on 8 January, 1905, he was enrolled among the Blessed. Pope Pius X proposed him as a model to the parochial clergy. In 1925, Pope Pius XI canonised him. His feast is kept on 4 August.