You are here: Home / Catholic Resources / The Saints / Saints Simon and Jude

Very little is known about these saints beyond them being mentioned as Apostles in the New Testament. Their feasts are celebrated on the same day possibly because they both preached the Gospel in Mesopotamia and Persia (where it is said they had both been sent).

Simon is called either the Canaanite or the Zealot (references to be found in Matthew, Mark, Luke and the Acts of the Apostles), in order to distinguish him from Simon Peter. After Pentecost, there are no more references to Simon in the New Testament. There are a number of legends, however, that focus on his life after Pentecost and his martyrdom.

It is said that, after he preached in Egypt, he joined Jude in Mesopotamia, after which they both traveled to Persia. It is in Persia that they were martyred (in Sufian / Siani). One story has it that Simon’s throat was cut, whilst another states that he was sawn in half.

It is interesting to mention that there is even another legend that mentions Simon traveling to Glastonbury, England and being martyred in Lincolnshire!

Regarding Jude: references are made to this Apostle in Luke, John and in the Acts of the Apostles. He is commonly identified with Thaddaeus, who is mentioned as part of the list of Apostles in Matthew and Mark (where there is no mention of Jude). As with Simon, nothing is certain regarding the facts of his life after Pentecost. Legends abound, however, including that mentioned above (his travels with Simon to Persia and their subsequent martyrdom).

Jude is known as the patron saint of hopeless cases. It is said that this is due to the fact that no one wanted to pray to him because he name was so similar to that of Judas Iscariot. Only those who had tried every other option would then, in a final act of desperation, pray to him!

Simon and Jude For Today

We know so little of these two saints, yet what wonderful examples they set for us! They continue to show us the importance of following Christ and spreading the Gospel. 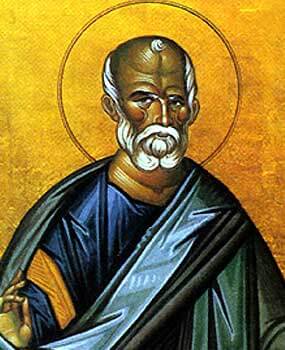 Relics claimed by many places, including Toulouse; Saint Peter's Basilica

Boat, oar, medallion, Bearded man holding an oar, a boat, boat hook, a club, an axe or a book; nearly every image depicts him wearing a medallion with a profile of Jesus, and usually with a small flame above his head; often carries a pen or sits at a writing location to make reference to the canonical Epistle; sailboat; inverted cross; square; halbert; loaves and fish; long cross; knotted club; fuller's bat; lance; saw; flail; closed book; shield: red with sailboat with a cross on the mast.