You are here: Home / Catholic Resources / Vocations / The Life of St. Jean-Marie Vianney

The Life of St. Jean-Marie Vianney 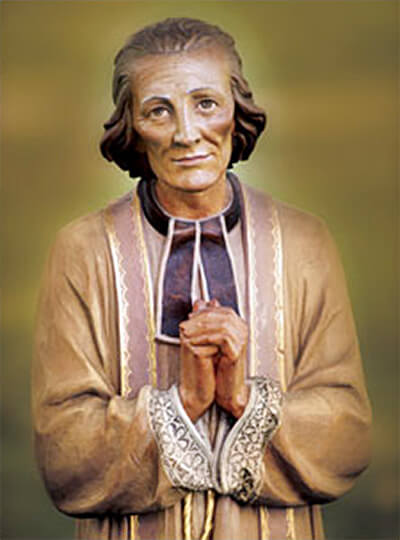 This article, The Life of St. Jean-Marie Vianney, written by Paolo Risso, was published on the 27 July 2005 weekly edition in English of L'Osservatore Romano, The Newspaper of The Holy See.

The simple priesthood of St Jean Vianney changed a town and a world.
On Tuesday evening, 9 February 1818, Antoine Givre, a boy herding sheep in the Dombes region, had an unusual encounter. He met a priest striding towards him, like a peasant on the road from Lyons. He was pushing a rickety cart heaped with objects, among which he could make out a wooden bedstead.

The priest called to the boy and asked him if it was much further to the village of Ars. Antoine pointed out to him the modest little town before them which was disappearing into the darkness. "How small it is!" the priest murmured. Then he knelt on the frozen ground and prayed at length, his eyes fixed on the houses.

"I Will Show You The Way to Heaven"

As he rose and set out again with his cart, the boy was at his side. When they arrived in front of the poor church, the priest said to him: "Thank you for showing me the way to Ars... I will show you the way to Heaven".

Ars, with its population of 200 who depended on the Parish of Misèrieux in the Diocese of Lyons, was unaware that it was welcoming its chaplain, Fr Jean-Marie Vianney.

He was born in Dardilly, near Lyons, on 8 May 1786, the son of Mathieu Vianney and Marie Béluze, poor peasants with a strong faith.

His childhood was marked by the tragic events of the French Revolution. While the Jacobins, supported by the Freemasons, were organizing the hunt for priests and sending them and their faithful to the guillotine, Jean-Marie was studying catechism in secret and fell hopelessly in love with Jesus. The Crucified One must indeed deserve all, the young man thought, if so many thousands of youth and adults, priests and lay people were giving their lives for him, tolerating even the most atrocious torture.

It was during a Mass celebrated secretly behind barred doors by an anti-Revolution priest in a home near Écully, close to his native parish, that Jean-Marie received his First Communion, which strengthened him in his inmost desire.

"I will be a priest", he affirmed.

Overcoming enormous difficulties, he was ordained to the priesthood on 13 August 1815, in the chapel of the Seminary at Grenoble. From that time an adventure began for a tiny French town that down the centuries would never be forgotten: they were to receive their "Curé d'Ars".

The day after his arrival he was almost alone as he made his way toward the altar to celebrate Mass. But a few days later, when some came to see what another priest could possibly have come to do at Ars and how he lived, the faithful found him on his knees in prayer before the Tabernacle, as though he truly saw Someone: they found him in the same position, morning, afternoon, evening and even at night.

Then some started coming to his Sunday Mass, they realized they understood what he was saying: he was talking about God, who rewarded the good with Paradise and punished the wicked with hell; about his Son, Jesus Christ, who came to die on the Cross to expiate the sins of the world, of his infinite love, of his forgiveness for those who change their way of life, of the joy that comes from him alone.

They were simple words, words of fire, unforgettable words that won the heartfelt admiration of the people.

Still others came to hear him. The same thing could happen today, if our priests were to preach like that and not about abstruse things.

The food he lived on became known through some pious ladies who went to help him at home: a little dry bread, a few boiled potatoes. They also told of traces of blood they had seen on his very plain clothing.

He had looked around and seen the sins of his people and had begun a ruthless fight against these evils with prayer, fasting and penance, offering his whole life to God with the Crucified One.

Then he listened to his people, he was kind, meek and very gentle, a true father with a marvellous message for them: love for Jesus Christ, intimacy with him, so that even the most rebellious could not resist his fascination.

Even those who were the most remote from God, the most recalcitrant sinners, soon felt that God had sent a saint to Ars and hastened to listen to him. Little by little, the tiny town was transformed. Those who saw and heard him felt drawn to his confessional: whole lives were converted, people returned to God, won over by his prayers and his "blood".

Dancing, drunkenness and swearing, things the Curé condemned most severely, disappeared from the town. Even the most dissolute young men changed their ways. The church was filled with people, including those who started to come from neighbouring environs.

In 1823, the Bishop raised Ars to the rank of parish. Fr Vianney wanted to leave, for he felt unworthy to be a "parish priest", but he remained out of obedience.

In 1827, he cried out to his parishioners with his heart full of joy: "Ars, my brothers and sisters, is no longer Ars!".

His Method: Being a Priest

What was his method? What analyses had he made, what pastoral plans had he organized? In a word: None!

He had only his priesthood, lived to the point where he truly became, more and more, day by day, "another Christ".

His priesthood brought him to a most exalted state: "Since the priest is important", he wrote, "the priest will only be understood in Heaven. If we were to understand him on this earth, we would die of love. After God, the priest is everything. Leave a parish without a priest for 20 years and beasts will be worshipped there", as it happens today, to the satisfaction of God's enemies who seek to corrupt priests in order to corrupt his people.

No one has expressed better than he how "frightful" it is to be a priest, to have the mandate to absolve people and to make God present in a host: "How a priest is to be pitied when he celebrates Mass as an ordinary event. How unfortunate is a priest without an inner life!".
Fr Vianney celebrated Mass early in the morning and it was apparent to everyone that he was fulfilling the Sacrifice of the Son of God on the Cross. He was absolutely certain that Mass is everything, because it is from this sacrifice that salvation comes, and in those moments God is adored as befits him."

If I were to meet a priest and an angel", he used to say, "I would greet the priest first and then the angel.... If there were no priest, the passion and death of Jesus would serve no purpose. What use is a treasure chest full of gold if there is no one who can unlock it? The priest has the key to the treasures of Heaven".

Consumed By The Confessional

The first treasure to open is God's forgiveness: from the first moment he arrived in Ars, Fr Jean-Marie had become the man consumed by the confessional. He had gone to Ars, indeed, he had become a priest to convert souls, together with Christ, to Christianize the world.

His parishioners flocked to him for confession and felt the joy of God's forgiveness and of conversion. He listened, understood, read their minds, prompted repentance and comforted them.

Ars became the European capital of reconciliation with God: men and women from across Europe and around the world would set out for France because they truly believed that in an out-of-the-way French village, a priest consumed by prayer and penance was speaking of God, hearing confessions and guiding souls to holiness.

The pilgrimages to see him became international: 10,000, 100,000, 400,000 or perhaps even more pilgrims went every year to Ars for 30 years. They were simple people, famous founders, statesmen, Bishops. They left him, renewed.

And all, like the peasant of Macon who when asked: "But who did you see at Ars?", were able to reply: "I saw God, in a man".

In the summer of 1859, Ars was still being invaded by pilgrims. On 2 August of that year, Fr Jean-Marie received Holy Communion and Extreme Unction from his own curate in simplicity and joy. He came face to face with God at dawn on 4 August 1859. In the feast of Pentecost, 31 May 1925, Pope Pius XI enrolled him among the saints, and on 23 April 1928, declared him Patron of the world's parish priests.

God's Logic: The 'Little' Ones

The poor boy from Dardilly, ordained a priest "through compassion" and in charge of an isolated parish, the one who prepared himself to die every day: because of the strange logic of God who chooses the little to depose the mighty, it was this man who became a teacher and model even for the Popes who sit on the Chair of Peter, who are inspired by him and hold him up for emulation to the entire Church.