You are here: Home / Catholic Resources / Pilgrimages / The Camino

The tradition of the camino originates from the anecdotal testimony, passed down the generations, that St James the apostle went to Spain to evangelise there among pagans near the western-most point in Europe, Cape Finisterre, an important Druid site. He had limited success in converting the people and returned to Jerusalem where he was beheaded by Herod in 42AD. His remains were returned to the place of his teachings in Spain, later named after him – Santiago de Compostela.

The legend centring on St James arose from the advance of the Moors into Spain, causing alarm among the local population as the invaders swept north to take control of almost the whole country during the Middle Ages. St James’s tomb was allegedly discovered after a shepherd followed a bright star that led to a field – the field of the star, Compostela. This led to a Christian revival at the time the Spanish people decided to drive the Moors out of Spain. There are numerous legends – most not credible, though they add to the mystique - associated with St James in Spain, including one that he appeared at crucial moments in the battles to aid in the defeat of the Moors. On the strength of these successes, St James became the patron saint of Spain.

Pilgrimages to the site claimed as the grave of St James began in the 10th century AD and became a major pilgrimage route in the 12th to 14th centuries. Claims of miracles, and the supposed findings of relics of St James, added to the aura around the pilgrim route. The conch, a seashell, became the symbol of the route, because St James’s coffin was alleged to have been covered in seashells when it was brought ashore in Spain.
Accommodation and churches grew up along the main pilgrim route, from the French border at St Jean pied de Port across northern Spain all the way to the grave site where a church was built. There are actually several pilgrim routes to Santiago, originating in Britain, France, Germany and Italy among others, and also including a pilgrim route through Portugal, but the main one is the 800-km route from the French border at St Jean pied de Port westwards through Pamplona, Burgos, Leon to Santiago, which is walked or cycled by many thousands of pilgrims every year.

While egotistic capitalism and the busyness of modern life have caused a major decline in Christian allegiance in Western Europe, the need for spiritual upliftment remains strong in the human heart, and the pilgrimage route has gone from strength to strength in recent times. John Brierley in his valuable book A Pilgrim’s Guide to the Camino de Santiago interprets these trends by claiming: “There is little doubt that there is a great thirst for genuine spiritual experience and a deep desire to refresh and enliven our religious life . . . We are awakening to a new spiritual age – one less dependent on outer authority and more attuned to the God within.”

Though the journey from the French border would normally take about 35 days, walking an average of 24km a day, each pilgrim is free to make personal plans and start on the route at any point that suits personal fitness and available time. To qualify for a certificate, a pilgrim needs to walk the last 100km or to cycle the last 200km of the route. Proof of the journey is obtained through overnight stops at refugios (hostels) where your camino card is stamped. These refugios are friendly places where pilgrims from all over the world meet informally. They are clean, but with strict rules. An overnight stay may cost only €4 or €5. In some cases a donation is all that is asked for. The camino is claimed to be the cheapest holiday anyone can have in Europe these days, but physical effort is part of the price, and part of the joy

Reasons For Making the Journey

Top
Pilgrims make the journey for many reasons. Some, deeply religious, visit the many shrines. Others may do the journey to come to terms with grief or great disappointments. Others again make the journey as a personal challenge and for the wonder of spending even a few days unencumbered by the worries of the outside world, revelling in the outdoors and the varying scenery ranging from flat, open shadeless farmlands to spectacular (but steep) mountain scenery, and ending in beautiful shaded avenues.
The closest to describing my reasons for going on the camino can be found in Tim Moore’s “Spanish Steps” where he wrote of pilgrims’ motives saying: “You walked it and you walked in the shadow of the past. Surely all those millions of medieval devotees had left behind something more than mere footprints.” Indeed!

Linda Hogan wrote: “Walking, I am listening to a deeper way. Suddenly all my ancestors are behind me. ‘Be still,’ they say. ‘Watch and listen. You are the result of the love of thousands’.” Those are moving thoughts I associate with very closely.

I chose to cycle the route from Burgos to Santiago, 500km long, with two of my daughters because we calculated we could complete the journey in the two weeks they had available, and because we were under the mistaken impression that cycling would be easier than walking. Though we could travel twice the distance of walkers each day, our heavily laden bikes were a major encumbrance on hills and over the difficult narrow paths closer to the destination.

We travelled at the end of April and beginning of May to get in before the summer rush, and were always able to find accommodation without having to travel too far if one or other refugio was full when we arrived.

It is advisable to travel with as little baggage as possible, but it is necessary to have clothes for cold weather and protection against rain, because we met strong cold winds to start with, and later had to climb into snow-laden mountains before descending to Santiago. We also cycled through one full day of rain.

Besides wonderfully varied scenery along the route, there were the superb cathedrals of Burgos and Leon to visit, other old and beautiful churches. We also attended a mass in three languages in which we were fortunate to hear Gregorian chant.

Reaching the destination, we attended the mass for pilgrims held at noon every day. This huge church was filled to overflowing. Even while the mass was in progress, pilgrims were still coming in with their packs on their backs, standing throughout the service.

They say somewhere along the route, a pilgrim will be moved to tears. My moment came in the mass when I found myself unable to sing the response “Allelujah”, because of such a big lump in my throat.

The camino is a memorable experience. Unforgettable. 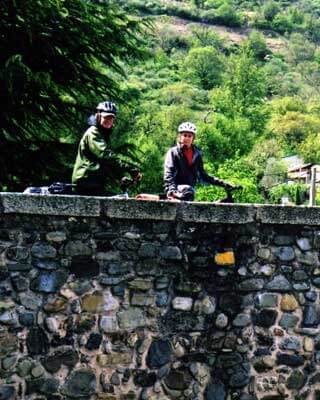 The beautiful stonework of the bridge leading into Molinaseca, against the backdrop of the vegetation on the mountainside. 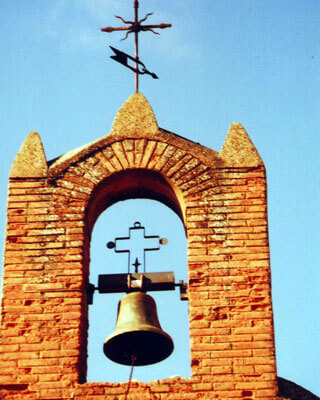 A beautiful belltower on a derelict church in Calzadilla 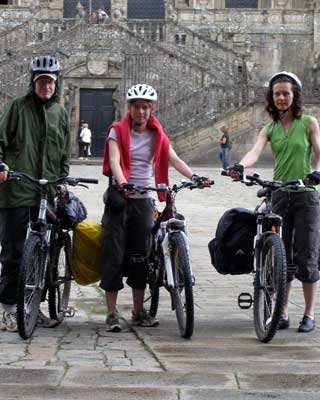 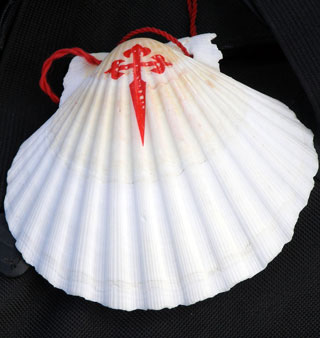 The conch – symbol of the camino 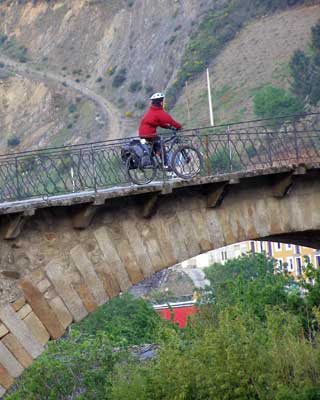 Crossing the bridge in Villafranca 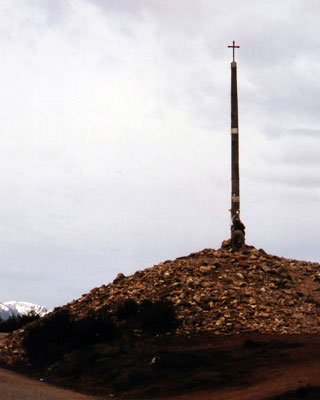 La Crux de Ferro, the iron cross at the highest point of the camino between Rabanal and Molinaseca. Pilgrims traditionally leave a stone or some other object bearing their names on the pile at the foot of the cross. 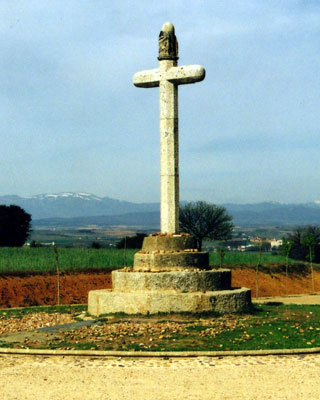 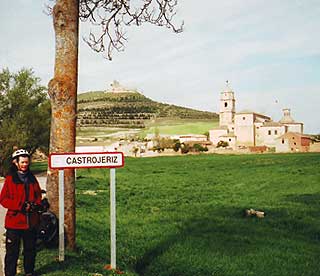 The picturesque town of Castrojeriz, with a castle on the hilltop behind.