You are here: Home / About Us / Parish History

This Story of Our Parish

It all started at Schoenstatt when Fr. Schneider, who preceded Fr. David Musgrave, called a meeting for Catholics living nearby, in 1970. I guess 12 families were present - something like the 12 Apostles!

For a number of years, Sunday Mass was celebrated in the Schoenstatt Hall with no more than 20 - 30 souls attending over the first year. I remember Sr Sponsata, who was a wonderful person, preparing the hall and welcoming everyone warmly each Sunday.

It wasn't too long before we had a core of parishioners - most of whom were young salary earners with lots of children and a lot of enthusiasm but little spare cash!

In the early days most of the parish functions, council meetings, home masses, braai's, and ladies' meetings were in private homes.

Eventually the subject of building our own Church came up - but from where would we obtain the funds?

About this time Roger and Colette Burckette St. Laurent came to South Africa to sell a branch of the family business at a very difficult time. Roger promised that he would donate the money for church land, if he was successful. Not long afterwards he was successful - and so we had our land! Earlier Fr. Schneider asked me to his office for a chat. After a few scotches and sodas he asked me to head up the Parish Council - so we had a Parish Chairman!

Fund-raising initially was on a small scale and included:

The Church Was Built

Fr. Schneider went to Germany on two occasions to raise funds. Eventually we had a sufficient amount of money to put down a small deposit and the church was built 8 years after the start of the parish. The first Mass was celebrated on the 6th August 1978, beginning in the Training Centre and commencing with the Gloria in the Church.

The Foundation Stone was blessed by His Eminence Owen Cardinal McCann, Archbishop of Cape Town on 29th January 1978 and the Church Blessed on 21st September.

Julian Elliott was the architect, Brice Bros were the building contractors and Dr Crawford Watson headed up the Building Committee. But we still had an enormous debt of R140,000 outstanding!

Everyone was involved - some of the key players were Harry Schuurmans, Mike Hayes, Johan Botha, Paul Kleu, Peter Meakin, Mick McDonaugh and the ladies.

It was an amazing project, requiring a dedicated and skillful team. It was surprisingly successful, bearing in mind that all involved were amateurs at this sort of undertaking. You can imagine how nervous the cashiers were collecting tens of thousands of rands and transporting it to the Sisters safe after midnight every night over the 3 days of the Fair! The Fair ran to many years, and so the Church debt was fully paid off. The last Fair was held on 4th February 1994.

Our wonderful organ, at the time, was donated by Lord Lilford.

Most of the garden was planted by the parishioners and their children over the weekends under the direction of Berenice Mallet, who managed to have the plants and trees donated.

Some of the altar vestments were sewn by a team of seamstresses, under the guidance of Pat Watson and Rita Gates.

Sister Adeltrud became the Parish Sister and was confidante to many families in the parish. After some 20 years she retired on the 1st February 1994.

A small group of ladies took the responsibility of visiting parishioners, with a plate of biscuits or a cooked meal for the family.

A major project of the parish started after a domestic worker at an afternoon tea function, suggested to Joan Williamson that she would rather be educated than have tea. Joan Williamson and Yvonne Strebel then attended an operation upgrade course run by Sister Marina at Schoenstatt and the Parish Education Project was born.

The "school" started at private homes but moved into the parish centre as it grew rapidly. Several parishioners became teachers, initially in literacy and gradually moving up the grades. After many battles with the Department of Education, Joan succeeded in obtaining official approval as pupils graduated in senior standards. For many years, others in the parish acted as taxis to transport the pupils home at night after classes. After Joan retired, Lena Godden and Gemma van Kets continued the good work, until it was transfered to Wynberg Boys High School. Joan was honoured recently by having that part of the school named after her.

The Year of the Flood

When Fr. David became Parish priest in 1982, he must have thought that he would not have any major expenses with a new church. No such luck!

During winter the church quite suddenly flooded, due to an underground pipe pressure, nearly half way up the aisle and then the flat roof started to leak badly and so major repairs were necessary.

The Garden of Remembrance

The Garden of Remembrance, promoted by Mark Clifford-Holmes and designed by Danka Forsyth and Fr. David, was built in November 2001.

Fr David Leaves Us For the UK

In September of 2007, the builders Moolenschot Construction, moved on the site to build the new presbytery at a cost of R1,300,000. Bruce Rauch Building Design was the draughtsman and Howard Donnelly was the project manager (and spent many hours). The offices were extended and revamped and a security fence around the property was erected.

A new organ for the church was donated and the old one was donated to the parish at Hermanus.

We installed a sewerage connection from our property to the Council sewers doing away with the need for the failing septic tank.

We covered the kneelers in the church.

God's help was in all this because we were able to do it before the crisis in prices hit us!

With the many new parishioners, our catechism classes have trebled in number and people have become more actively involved in the parish life.

Read More About Our History

We are working on writing the history of our parish. And as we do so, we will be adding information and pictures to this section of the website. 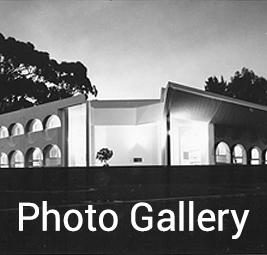